MARCH ON THE ORANGES SEES DEMISE OF DUTCH QUEEN!

Yesterday April the 29th the long expected March on the Oranges, the Dutch royal family, took place in Leiden. A parade of anticapitalism and antinationalism, including a tank, a guillotine, a sound system and a tribunal toured the city centre of Leiden on the same day Queen Beatrix had chosen to celebrate her birthday there. To the surprise of everyone, queen Beamix (showing a remarkable similarity to the Queen Beatrix of the Netherlands) was captured by daring Amsterdam anarchists. They had dragged her to the mobile people's tribunal in Leiden and dressed her in a smart black and white striped suit and attached something resembling a black bowlingball to her feet. Some 350 people had shown up to judge her case.

The public's prosecutor accused her and the House of Orange in general of upholding a nationalist identity, causing conflict and seclusion, being part of the capitalist upperclass and thus maintaining and increasing social injustice and ecological destruction, having a reactionary influence behind-the-scenes in politics, promoting pepperspray, centuries years of tax evasion and hunting and mistreatment of animals. Beamix' sollicitor's main defence was that the people liked her - well, not this public!, that the prosecutor was a cryptocommunist and that her demise was a a leftwing autonom's conspiracy in general, what nonsense!

The verdict was spoken when the March returned. Although the most ingeniously cruel plans had been proposed by some of the people and a mighty orange and red-white-blue guillotine was on standby, the tribunal chose for an ideological punishment instead of a physical one. Thus Beamix was pied. Of course, the verdict also included distribution of her possessions among the people, abolishment of the monarchy and the state and the declaration that the holiday formally called queen's day would now be a day to celebrate antinationalism. Finally, free food was passed around amongst everyone!

Somewhat surpisingly to some, nothing nasty happened. Media had been speculating riots, violence and pieings of the queen, although the Comittee March on the Oranges COMODO hadn't done or said anything that would indicate as such. But the guillotine on the website http://squat.net/beakomt (Bea is coming...) and the sleezy articles of journalists and insinuating tv-bulletins underlined with doomsday melodies and such seemed to be enough for the local government to make an emergency act to seal off a part of the inner city and so on and for intelligence services to be hunting the Comittee regularly. On 29A itself, policemen from nearby The Hague were in charge, because of their so called experience with demonstrations and such would show them an advantage. Our initial fear of police-agression linked to their experience (in brutality, that is) diminished quickly when it became clear that these policemen had no idea of Leiden's topography and all went very easy.

Although a bit more people were expected (the weather wasn't with us this time and some illegal evictions* were happening around), this has been one of the most motivating, politically charismatic and plain fun demonstrations we've had for some time.

The March on the Oranges was organised due to the MAYDAY global day of action against capitalism. On the 27th, a demonstration against repression had taken place as a first action linked to mayday. On the 28th, a spokesperson of the railwaycompany (for her defending the Betuweline, a destructive freightrailwayproject) had been pied as well as a senator of the socialist party (for his nationalism). Monday will show an action against a temp-agency and surely more actions will take place these days! In any case, this will not be the last march of this Comittee! This year queensday has seen the demise of Beamix, next year Beatrix?!

No monarchy, state or capital, but a world for us all!

Footnote:
* Some squats in Nijmegen were illegally evicted by order of the mayor; squatted status had allready been approved and these squats weren't even city property, but, said the mayor, the increase of 'squatting situations' in Nijmegen may pose a threat to public order because of the 'magnetism towards the nationwide squatter's movement'. 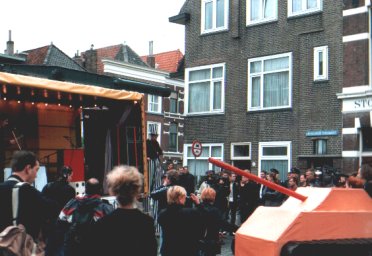 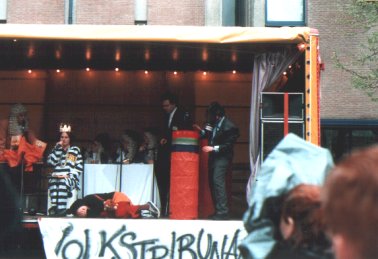 A victim of pepperspray is lying on the ground 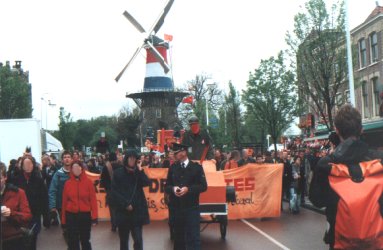 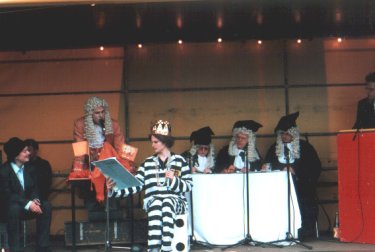 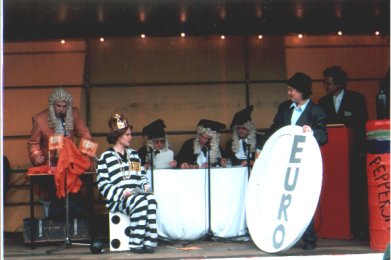 Queen Beamix says its her face on the Euro 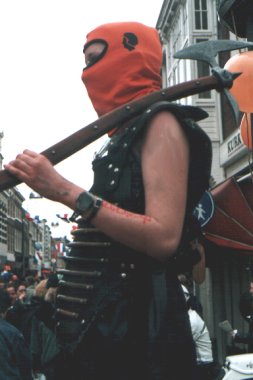 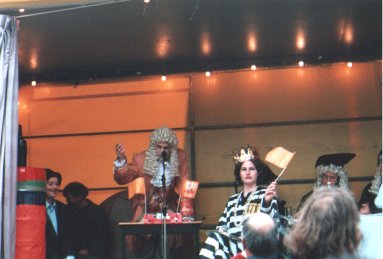 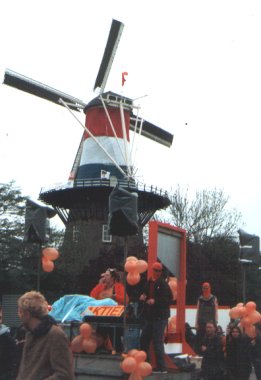 The Demonstration passing the Nationalistic Windmill 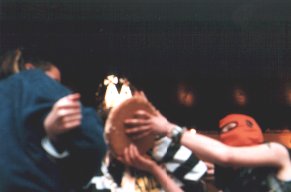 Pie in the Queen's face

Pie in the Advocate's face 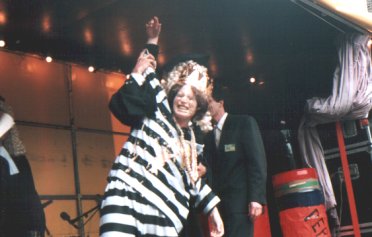